Transfection is the use of chemical (liposomes, chemicals) or mechanical (electroporation) means to transfer nucleic acids into cells in order to alter mRNA expression or the genetic makeup of a genome (i.e. stable expression of exogenous genes or gene knockout). Transfection is used to develop genetic therapies for diseases such as obesity, AIDS, cancer and cardiac issues. 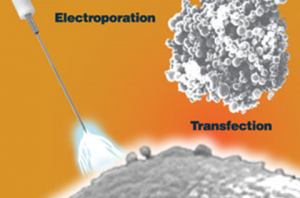 Gene silencing (called RNA interference or RNAi) is a technique through which the expression levels of a gene are turned off or knocked down. Typically consisting of a 20-25 base nucleotide sequence of double stranded RNA (dsRNA), siRNA is extensively used in RNAi studies. Although a gene may be silenced at either the transcriptional or post-transcriptional stages, RNAi is specifically a post-transcriptional gene silencing mechanism achieved by transfecting a dsRNA into a cell.

Chemical transfection is the uptake of a test reagent either through the liposome binding to the cell membrane, endocytosis or interaction with a cell surface marker. Mechanical transfection is the physical movement of proteins or nucleic acids into the cell, via electrical current. Other methods exist, such as viral delivery of DNA into cells (termed transduction). A similar process to transduction of delivering plasmid DNA into bacteria or non-animal eukaryotic cells is called transformation.

Transfection is used to describe transferring a purified protein or nucleic acid (DNA, siRNA or miRNA) into mammalian, eukaryotic cells. Whether it is by chemical or mechanical transfection, the idea of transfection is to create an opening in the cell membrane to allow exogenous genetic material to pass into the cytoplasm. The design of the transfection delivery reagent determines the destination of the payload (siRNA, miRNA, plasmid DNA). The delivered payload either remains in the cytoplasm for transcriptional regulation or continues to the nucleus for integration into the genomic DNA and stable expression of the payload (plasmid DNA). Transfection is used to deliver nucleic acids to cells in the creation of transgenic mouse models, genetically modified plants and even genetically modified pets.

As noted, well-constructed transfection reagents offer compact, protective delivery vehicles capable of carrying a high ratio of DNA or RNA cargo and can deliver the payload to the desired cells/tissues without being toxic to the cells.  Transfection is a highly… [Read more]
List of citations and references Algogen Transfection Products and Services

Manipulation of gene expression by transfection of cultured cells enables a fully controlled, clean environment for the study of apoptosis, cell cycle, target gene expression and mechanism of action. There is a vast array of in vitro transfection reagents available on the market that is specific to the researchers’ needs. Although cell culture studies do not require a transfection reagent to protect the payload from the harsh environment of circulation in animals, it must provide protection from degrading factors in cell culture medium and FBS (i.e. DNases and RNases). 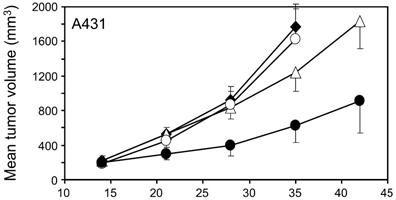 In a typical animal study, resection of tissues allow the researcher to view the efficacy and global biodistribution of their test compound. Tissue samples are collected for gene quantitation (i.e. qPCR or western blot). qRT-PCR assays can be designed to detect delivery of the active pharmaceutical ingredient (API) to tissues throughout the animal. However, delivery to a tissue does not mean the delivered API is an active molecule; therefore, changes in target gene expression are examined to determine functional activity of the test article.

Due to the harsh environment in circulation, the nucleic acid cargo must be protected from clearance and degradation by the delivery agent, along with not triggering an immune response.

As with any well designed experiment, positive, negative and non-treated controls need to be included in a transfection study design. Whether looking at expression knockdown of multiple gene targets using miRNA, or focusing on a single target such as luciferase expression, the appropriate transfection controls are needed. The use of controls must be included whether you use a lipid transfection reagent or electroporation.

Transfection positive controls typically consist of siRNAs designed against gene targets that are known to be ubiquitously expressed, cell phenotype or viability is not effected by silencing the positive control, the gene is easily targeted and the resultant data typically exhibits a large decrease in expression upon treatment. Positive control siRNAs used in transfections include gene targets such as GAPDH, KIF11, Lamin A/C or PPIA. The results of the transfected positive control siRNA tell the researcher the system works, it aids the researcher in understanding any intra- and inter-experimental differences, the transfection reagent is able to deliver the payload to the cells and the end-point readout exhibits a quantitative signal that is significantly separated from the non-treated or negative control sample.

Additionally, all experiments should include a non-treated control and a mock transfection (i.e. adding only the transfection reagent). The mock and scrambled control helps in understanding any experimental related toxicity when data output is compared to the non-treated sample.

Stable transfection is the integration of plasmid DNA into the genome of a cell. Studies incorporating a stable cell line includes cell based assays to determine gene effect on apoptosis, overexpression of the gene insert for protein production or incorporation of a fluorescent/luminescent marker in order to track cell growth when surgically implanted in a cell line derived xenograft mouse model (CDX mouse model). The creation of a stable cell line enables the researcher to analyze long term effects of the introduced gene.

Generation of a stable cell line is a two-step procedure, the first being a transfection of exogenous nucleic acids into a cell or silencing a particular gene (knockout). This event is followed by application of antibiotics to select only those cells exhibiting the desired expression; all other cells not expressing the newly inserted gene will die off due to antibiotic treatment (i.e. Puromycin).